Last week when we were walking Story and Kate we came to an area of the sidewalk that was covered with berries that had fallen from an overhanging tree. I thought they might be mulberries but, having little knowledge of berries that grow on trees, I supposed I had better do a little research on the mulberry tree before getting too excited. As it turns out they have no poisonous look-alikes, so when we went for walk on Friday we took a bucket and picked a quart of berries! They taste somewhat similar to a blackberry. A mulberry cobbler might be in our future… 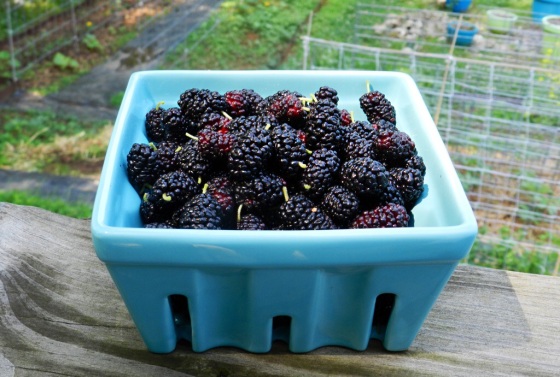 I started my internship at Mountain Meadows Farm today! We picked strawberries until it started raining. Then we went inside and did a little cleaning. After the rain cleared off we thinned the pear and asian pear trees. I saw two adorable tree frogs – apparently they like Asian pears! After lunch I thinned some of the bigger pear trees by myself while Shannon went to get all the strawberries we picked. Then the sky started looking very ominous and they sent me home early before the rainpocalyse hit. Except I don’t think it ever did. It was quite nice and sunny at our house, and I got the garden weeded and all my broccoli and cauliflower transplanted.

The garden snapshot is back! I’ve been trying to post these photos for about a month, so I hope you’ve got a while to read this…

A late spring freeze got all my fruit this year. I covered all the trees, but it wasn’t enough. Of course, immediately afterward I read a tip about stringing Christmas lights on small trees to provide extra warmth. I have to try that next time! I took these photos before the fruit fell off. T_T 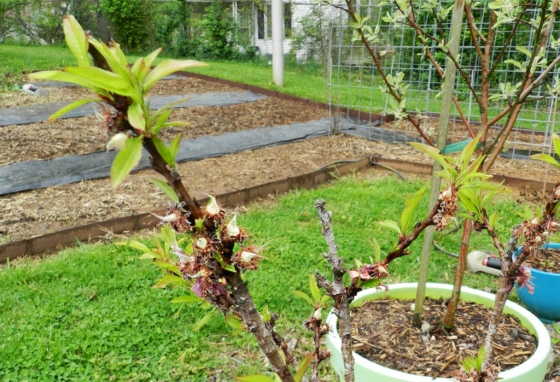 I got a ton of stuff done in the garden after it warmed up a bit. Here’s what it looked like earlier this month. 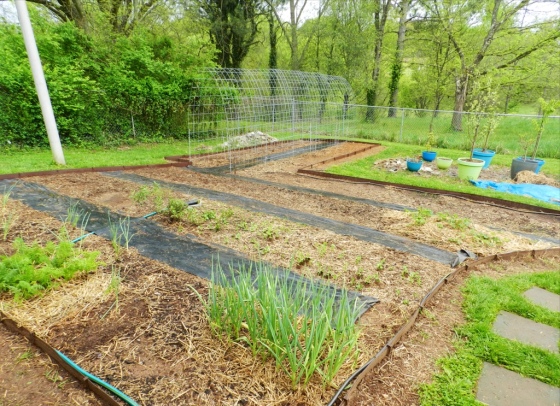 Here were all the little bok choy plants. They have since bolted prematurely, so I won’t be getting any bok Choy this year.

Here is the garlic then.

And now. It’s looking great this year, although I didn’t plant nearly as much of it. 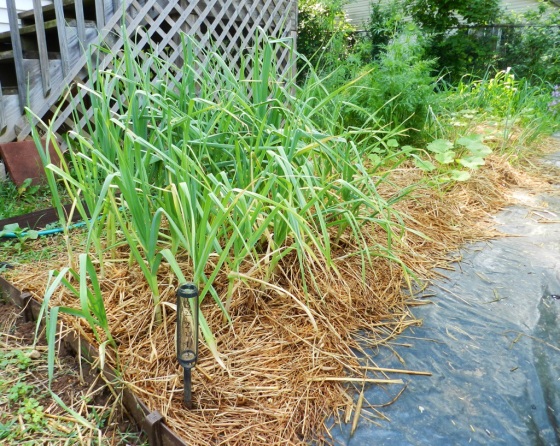 Here are the strawberries a few weeks ago, which I just started picking last week. 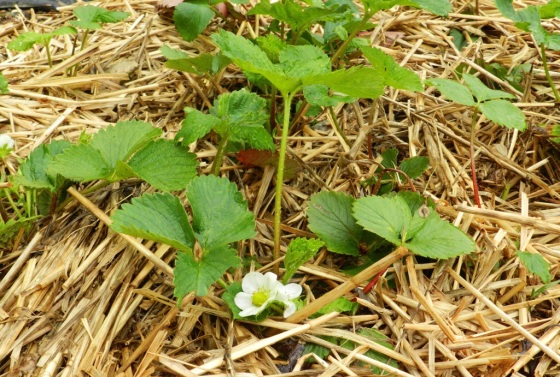 This zucchini plant had just come up.

And here they are now. They seem to be off to a slow start this year. 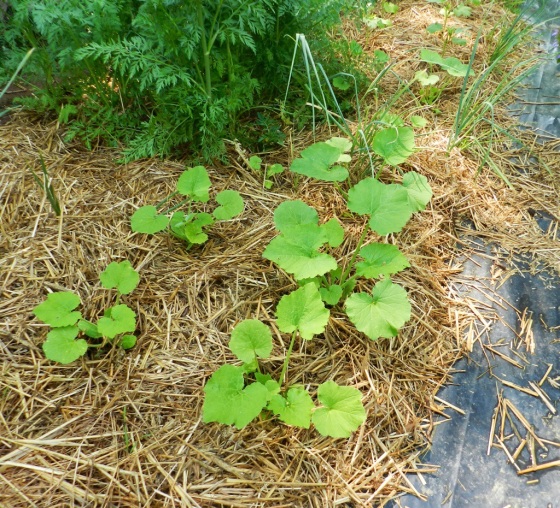 Check out the corn in perfect little squares! 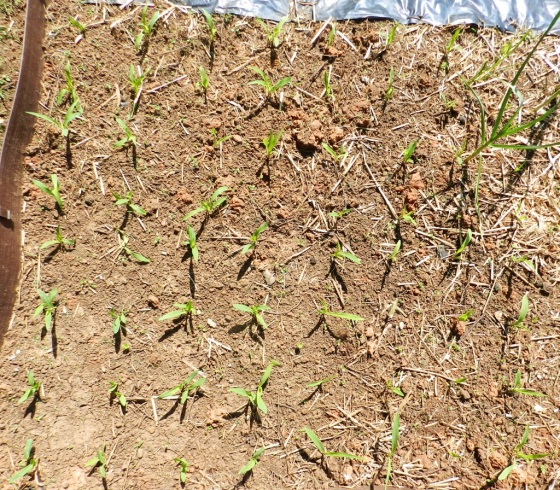 This year I’m using a garden stamp to plant my seeds. It’s such a simple yet brilliant tool for square foot gardening! And the best part is that I don’t have to bring a measuring tape to the garden any more. When we installed the edging I placed the stakes every two feet and stapled the plastic pathways every foot. Between that and the garden stamp my plants are perfectly spaced, which makes me so happy. And the perfect corn is a little taller now.

These peas had just sprouted. 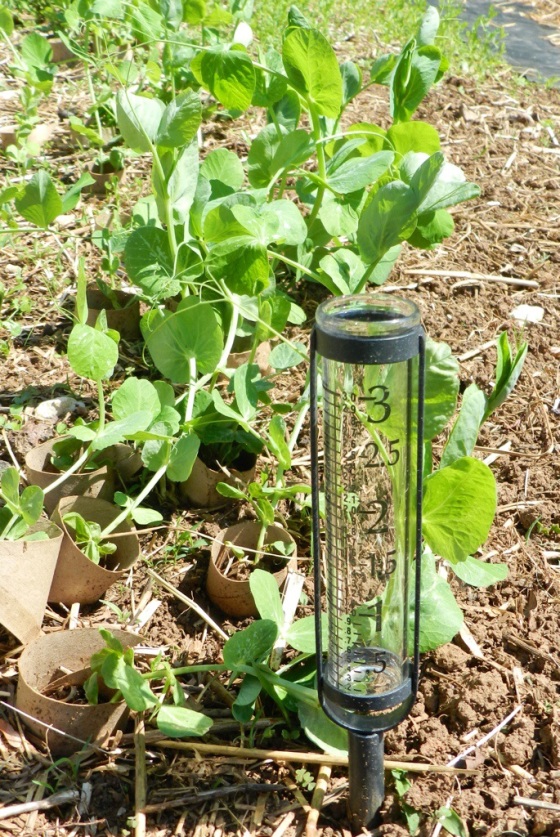 Last week I made a pea trellis. We already had the bamboo poles, so I just attached some pea netting. I really like the way it turned out. 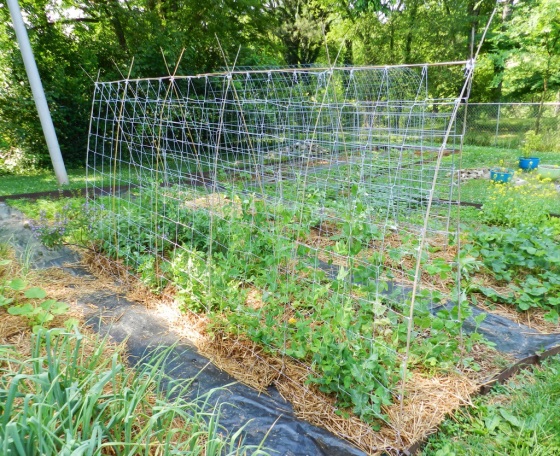 Right behind the peas are the lentils I decided to try. Neither of the seed companies I ordered from carried lentils, so I just got some from the bulk section at Earth Fare. Nearly all of the French lentils germinated, but only a few of the pink ones did. I’m very interested to see if they produce well. They’re pretty little plants.

Right beside those are the parsnips.

I decided to try a new trellis system for the tomatoes this year. Most of the varieties I grow are indeterminate, and the regular tomato cages weren’t cutting it (although I think they’ll be perfect for the peppers and eggplant). We had great success with using cattle panel as a giant trellis archway last year, so we bought a few more panels and cut them to size for the tomatoes. I think they’ll work great.

I just finished planting the peppers and eggplant last week. I’m trying Anaheim peppers this year (poblanos were too spicy!) and several kinds of eggplant, which look better than ever. 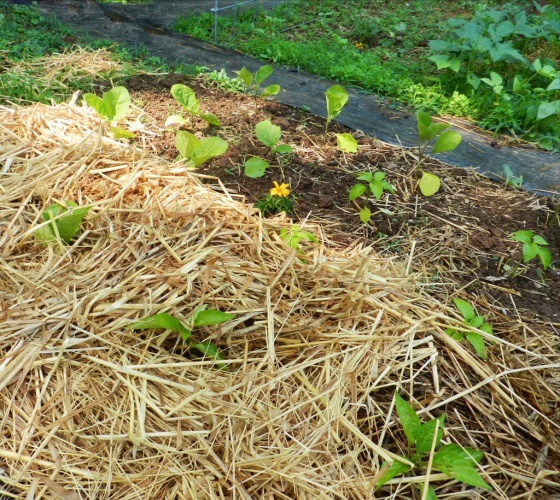 This is cauliflower, cabbage, and broccoli right after I transplanted them. 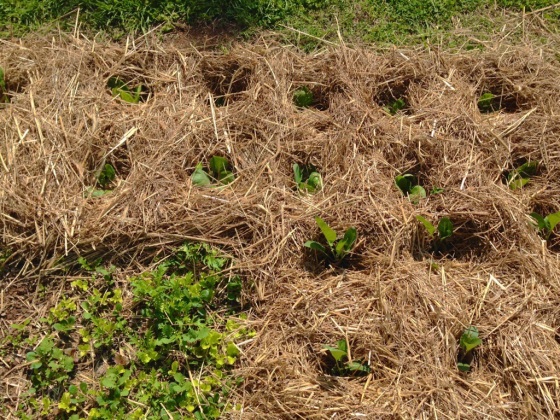 And yesterday, from a different angle. 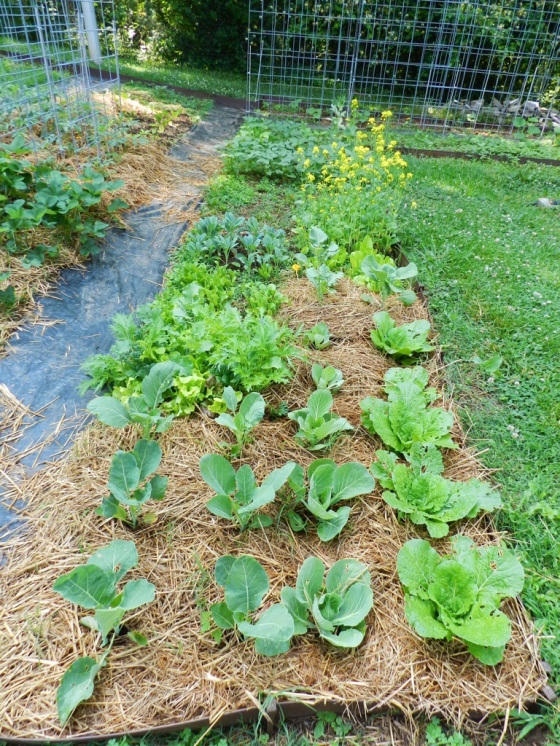 The mesclun greens are finally big enough to be picked. I’ve been waiting forever for salad!

These are the beans from earlier. I’m trying more drying kinds this year. I’ve had great luck with growing beans, but a surplus of green beans which Matt isn’t that fond of. 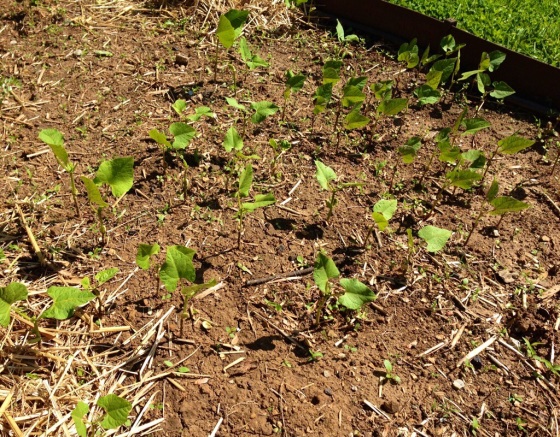 They grow fast! Fava beans, chickpeas, and edamame are there too. 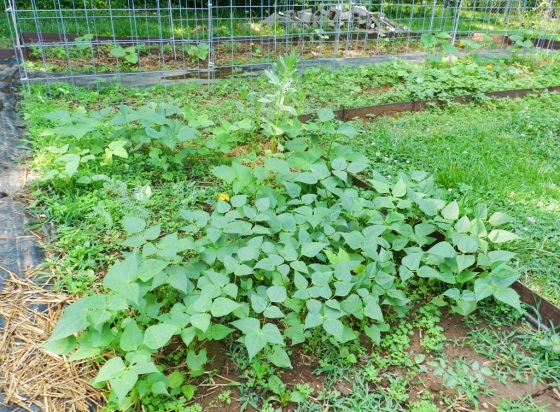 The squash and pumpkins are just getting started. This bed really needs mulching before the weeds take over…

Last but not least, here are the potatoes.

This photo was taken just two weeks later. I can’t believe how fast they’re growing! It’s going to be a good year for potatoes. 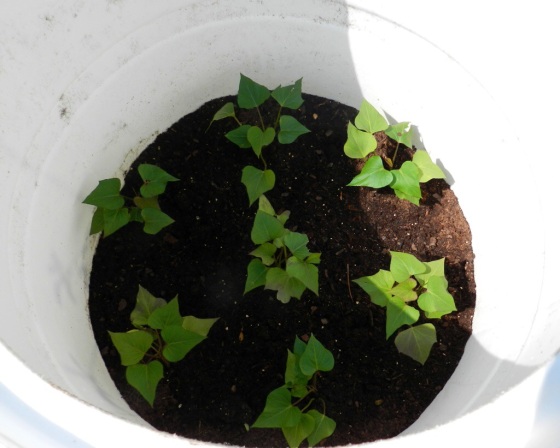