Now, about our trip to Michigan! Matt decided that he didn’t want to go to the Detroit Tigers game after all, so Story got to come with us. Along the way we stopped at a Graeter’s (ice cream place) per recommendations. I got their most popular flavor, the chocolate raspberry chip, and can now also give my recommendation.

The hotel we had reservations at (Holiday Inn Express) was pet friendly, and Story did great on her first stay in a hotel! She even posed for this picture as proof. 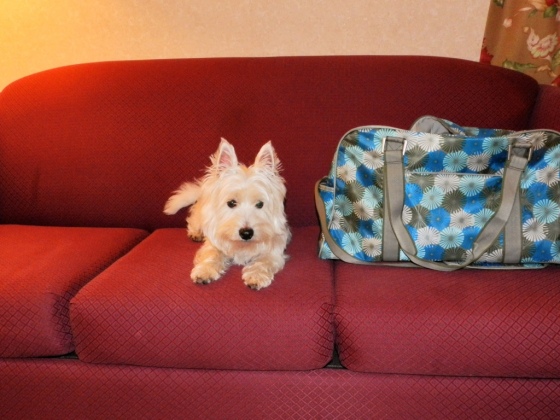 On another interesting note, the hotel had a pancake maker instead of a waffle maker. It was sort a pancake making conveyor belt mystery machine. I don’t think it will be replacing the waffle iron any time soon.

On Sunday morning we went to meet the breeder at a flyball tournament where she was competing with one of her dogs. Kate attracted a good amount of attention with her adorableness, and a lady trimmed her very sharp nails for us before we left. We had a puppy nest all ready in the floor of the car with a towel on top of a garbage bag (just in case!). Story was somewhat appalled that she had to share her space with that cuteness, but she subjected herself to cuddling a few times.

Kate slept most of the way, either on the floor or in the crate in the back seat. I thought I would use some of the 9 hours in the car to get her used to going in the crate, but she’d obviously used one before, because she pranced right in and settled down. And there were no accidents the whole way! I’m pretty sure she’d already learned to use the bathroom on command by the end of the day.

Story is still getting used to having another dog in the house, and as usual is very vocal about her opinions. Happily, Kate is undeterred in trying to win her affections. Today she learned to sit, practiced walking on a leash, and even learned to ring the bell to go out! I’d say she’s off to a great start. 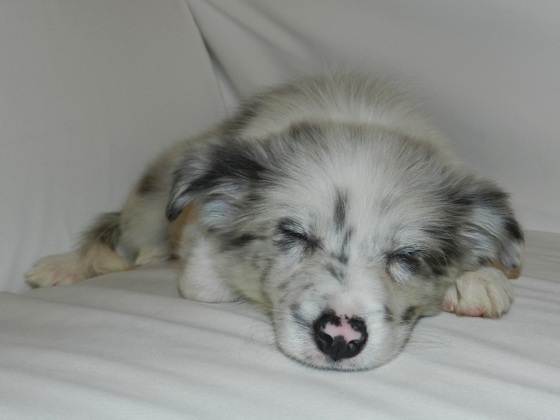